This week is the house that doesn’t nearly get the love it deserves and that’s particularly sad as this house is the most loyal and loving. Yes, I’m talking about our Hufflepuff’s.

As with previous weeks I’ve decided to with 5 characters from other books that I think would belong in Hufflepuff.

Reminder: Not all characters have every single trait but I’ve tried to place them where I think the majority of their traits will end up.

When it came to choosing a side for the infamous The Hunger Games love triangle I was firmly on Team Peeta.

Often it’s hard not to think of Peeta in conjunction with Katniss and that’s probably because of those traits that make him a Hufflepuff to begin with. Peeta is a genuinely warm and caring person who is incredibly loyal to Katniss and Haymitch and will do whatever is needed to ensure their safety.

He has a strong sense of what’s wrong and right but doesn’t rush into action unnecessarily and instead uses his compassion to bring comfort. We tend to forget that he also comforted a tribute in their dying moments but he did because in his mind that’s just what should be done.

Out of the March sisters of Little Women I actually think two fit into Hufflepuff and that would be Meg and Beth. I’m cheating here (completely not a Hufflepuff move) by choosing two characters and lumping it into one.

Beth is just goodness personified, whether this is caring for sick children or abandoned  kittens, spending time playing the piano for her elderly neighbour or just seeing the good in everyone.

Damn it, something’s just flown straight into my eye. 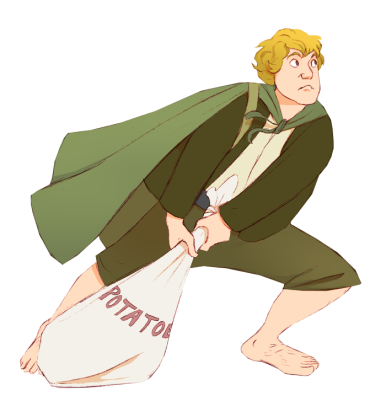 If I’m not writing a lot about Samwise from Lord of the Rings it’s because what I have to say doesn’t do justice for how truly loving and self sacrificing this little hobbit is.

Frodo may have carried the ring but Sam carried Frodo. Without Sam there would have been no happy ending.

Let Brienne of Tarth from The Song of Ice and Fire series be the evidence that those sorted into Hufflepuff are not soft or gentle.

If it all kicked off I would want Brienne at my side. Not just because she would kick absolute ass but because I know that she would 100% stick with me all the way. Loyalty is one of Brienne’s strongest traits and it is her display of unwavering devotion to those she believes in that inspires even Jaime Lannisters change of hardened heart.

Miss Honey from Matilda hasn’t had a wonderful life what with being abused by her aunt, Miss Trunchbull from childhood well into adulthood. But the harshness of her life hasn’t hardened her and she remains loving and nurturing and cares deeply for all the students that she teaches.

She empathises with Matilda in particular, as she can see how Matilda is treated by her own family. Despite the treatment Miss Honey continually receives from Miss Trunchball, Miss Honey will never leave the school because she will not leave the children to the cruelty of her aunt.

Here are my sorting hat selections for Hufflepuff!

Hufflepuff’s are genuine rays of sunlight when the day is grey and not only are they naturally skilled at supporting people, they actually want to spend their time doing it too.

The other houses may be more popular as bravery, wit and ambition are ‘seemingly’ more desirable traits but the solid, unwavering dedication of a Hufflepuff is priceless.