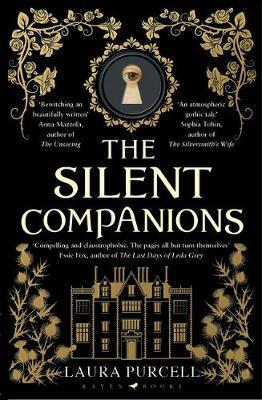 Newly married, newly widowed Elsie is sent to see out her pregnancy at her late husband’s crumbling country estate, The Bridge.

With her new servants resentful and the local villagers actively hostile, Elsie only has her husband’s awkward cousin for company. Or so she thinks. But inside her new home lies a locked room, and beyond that door lies a two-hundred-year-old diary and a deeply unsettling painted wooden figure – a Silent Companion – that bears a striking resemblance to Elsie herself…

At the time of writing this review Goodreads have rated this as 3.98 out of 5

The new doctor took her by surprise. Not that there was anything unusual in his arrival – doctors came and went often enough. But this one was young. New to the profession, as well as the place. There was a brightness to him that made her eyes ache.

“This is her? Mrs Bainbridge?” The Mrs was a nice touch. She could not remember the last time she had been given a title. It played like a tune she could only just recall. He looked up from his notes, intent upon her.

This was supposed to be a buddy read with Marina at Books of Magic but because I’ve never done a buddy read before and had no clue what the heck I was doing I completely botched it. We’ll attempt one again now that I know I need to practice the art of restraint.

The reason I failed at reading this with a buddy is because I got carried away and binge read it over one night. Like Kevin McCallister I was home, I was alone and my evening had a whole bunch of unaccounted for time. So I filled it with this book.

This is the first Laura Purcell I read, the second being The Corset which I enjoyed very much and gave 4 stars to. The Corset was a requested ARC and I requested it because of my enjoyment of The Silent Companions and how badly I now wanted to read another Laura Purcell.

The Silent Companions is a book that I really enjoyed. I’ve said it before – 3 stars from me is a good book, not an OK book but a good one. I am known for being picky and although I debated giving The Silent Companions an extra star I stayed with 3 because when I digested my thoughts and feelings I realised there were some things about it that didn’t make me adore it like I should. But I did really like it. Let me stress that again!

This is a haunted house story but it’s not so much the house that’s haunted as something within it. Elsie, our protagonist is awaiting her execution for murder and as she speaks to the doctor who has come to visit her we hear her tale and what a creepy one it is.

Pregnant and suddenly widowed, Elsie travels to her late husband’s once grand estate with her brother and her husband’s cousin. There she meets the household staff, learns of the houses macabre history (including suggestions of witchcraft) and discovers something unusual in the attic which she really should have kept locked up.

Silent companions are a Dutch invention and are wooden 2D figures that are placed in someone’s home to act as a ‘companion.’ It’s a perfectly unusual oddity that is crying out for someone to make them even more creepy and Laura Purcell, with her easy and engaging writing style, manages to do just that and successfully conveys an atmospheric tale of paranoia and isolation as the events around Elsie escalate and unfurl.

What didn’t work for me with the story telling is the fact that we are hearing this story via Elsie in her prison cell. This way we are already aware of some of the outcomes of the story and so I feel the suspense is diluted. While I feel sometimes knowing the ending can cause a sense of dreaded anticipation it didn’t feel that way for me here.

What also didn’t fully work for me was the diary entries interspersed between the main story. This is the way we find out about the past of the house and the reasons why the companions are haunted.

I actually liked the diary entries as a device to allow us two stories in one and to act as a bridge between time (the house itself is called The Bridge, nice touch) showing how the horror in one century can impact the next but something felt a little flat to me. I think it’s because I worked out who or what the evil was before it was revealed because, to me, it seemed obvious.

In terms of the characters, some felt like ‘bit part’ players with no development. For instance Sarah is never fully fleshed out, neither is Jolyon or the household staff and their existence feels more like plot device fodder.

In the past we have Anne and her daughter Hetta. As the diaries are Anne’s we get to know more about her and her dire situation (she is someone to be pitied) but the character I thoroughly enjoyed the most was Elsie.

Elsie is scared and confused but there is a raw strength to her and despite her fear tries to make it right. As her story continues her past is revealed to us and we understand more of who she is and what she has done to survive. There is a wonderfully subtle inclusion of something that I won’t spoil but it serves to demonstrate that Elsie has suffered horrors worse than any haunting.

Where Laura Purcell really shines is in the setting. The house and its surrounding village is dilapidated and soaked in dark horrors which make the villagers and neighbours suspicious and twitchy. The writer has created a setting where you feel the darkness creeping along the hallways (along with whatever else) and the mist rolling in through the fields. Winter in Victorian England seems to be a dark and dreary place and she makes it feel like you are there.

I’ve never been more pleased to have electricity.

Despite this I was disappointed by some plot points that were introduced and dropped – why did one of the companions look like Elsie? Why was there a hallucination of the nursery? Where did the seller of the companions go? I don’t know if these were created to add to the creep factor but I found them more confusing than eerie and if you’re thinking over something because you ‘didn’t get it’ rather than it unsettled you than that does tend to act a blocker to full enjoyment. Maybe it’s me.

I also found the ending a tad disappointing. For me, creepy Gothic stories work best (much like horror) when you get suggestive hints of what is happening. You want to see the finger, not the whole hand and certainly not the full body. Metaphorically speaking. Unfortunately I found that some elements of the story got more outlandish towards the end and lost it’s suggestiveness in trade for full blown ‘weird stuff happening.’

I also wondered whether this story could have gone a different way completely. Instead of it being a clear ‘supernatural’ horror it could have been left open with the possibility of something more human. That would have made it more awful. Because for some reason I am wanting ‘more awful.’

The book was not awful, it was good. It was very good. I enjoyed it very much and like I said, I was torn between a 3 and a 4. In the end it was a 3 for me because of the points I outlined above and wouldn’t stop thinking about, but believe me – if you read The Silent Companions you are in for a eerie, well written time.