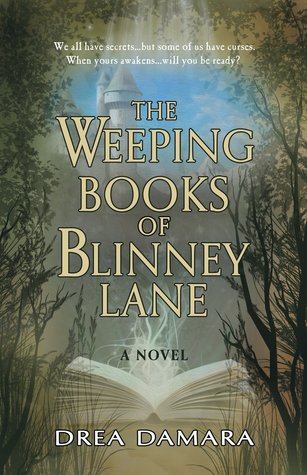 Sarah Allister just wants a normal life running her bookstore and daydreaming about the handsome deliveryman. Contentment seems within reach, even if she has to deal with the daily phenomena that occur in her shop.

But when her spirited nephew shows up to spend the summer, all bets are off. Now Sarah must keep Ricky from discovering the curse of Blinney Lane and awakening its full power.

Will Ricky heed Sarah’s warnings? Or will he accidentally awaken the magical weeping books and send Sarah back to a land she swore to forget?

Get ready for a modern fairy tale that will sweep you away to lands beyond your imagination.

At the time of writing this review Goodreads have rated this as 3.84 out of 5 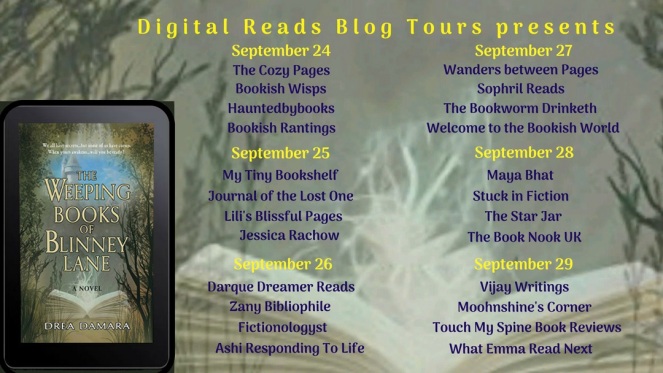 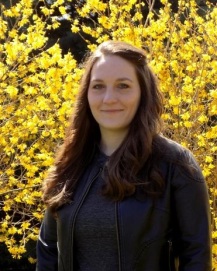 Drea Damara grew up in Illinois working on her family’s farm. Raised in a home of seven with only one television, she spent her free time reading and roaming the woods. She set writing aside to join the Army and later returned to the Middle East, conducting similar work as a civilian. Drea enjoys writing in multiple genres and is currently working on additional installments of her Blinney Lane series.

Of all the comforting objects in this world, few things are as reassuring and accepting as books. Books keep and reciprocate our secrets, dreams, regrets, and hopes better than any friend in the world. Sarah Allister took comfort in this thought as she walked past the shelves in her bookstore. They were full of countless stories she knew by heart. When she passed by the books she had read, they would remind her of what had been happening in her life at the time, as well as the people who had been there. Living along wasn’t lonely when you were surrounded by that much history.

This is my first book blog tour! Yay! Let’s hope it is the first of many! Don’t forget to have a look at the other blogs to see what they have to say about ‘The Weeping Books of Blinney Lane.’

If you know me you’ll know that I am always honest in my reviews and if something doesn’t work for me then I will say that it doesn’t and why.

This book drew me in with the mention of a witches curse and magic books and although there was lots of the latter I could have done with more of the former.

Blinney Lane, a small historic lane in Salem with an iron entrance arch, has been cursed since the then residents bound, tormented and executed an eighteen year old girl for being a witch. She wasn’t a witch, just an attractive girl having an affair with a married man but then again… she could have been a witch as she managed to land a successful curse upon all the residents and their descendants.

All those ‘chosen’ are marked with the scars from the lashes that were inflicted on the witch or from the ropes that bound/ hung her. Those marked can never leave the lane at risk of experiencing great pain. Those not marked are free to come and go as they please.

Sarah Allister is one of those descendants who has been impacted by the curse and she happens to own the bookstore where books start doing funny things. I like Sarah. I liked her longing for love and for something beyond the confines of Blinney Lane and I liked the fact that she was lonely and lost because it felt like a very real consequence of being bound to a curse.

Unfortunately, as they should in stories, things get worse before they get better and Sarah is joined by her teenage nephew Ricky. Now the blurb refers to him as ‘spirited’ but I’m going to call a spade a spade here and call him a d*ck.

For me it was a bit disappointing that we had to experience so much of the story from Ricky’s viewpoint. I would have been happy with it just being from Sarah’s.

I felt this book could have been an exploration of an ancient curse, a narrative about the horrific actions of the townspeople against an innocent women, the struggles of the current residents living with the curse and the story of a desperate fight from a protective aunt to save her nephew from its reaches. That’s what I was hoping for.

Sadly, the book began to lose me about halfway through because that’s not what happened.

The Weeping Books of Blinney Lane became the story of our characters being able to transport magically into a book written by one of Sarah’s ancestors. We lose all threads of the witch and the curse and they are dropped off without ever being tied up.

Oh, is what I thought. Because I was liking that bit.

Being magically transported into a book is what this story became and, as it turns out, is the actual story. Everything about a witch and a curse is preamble.

Unfortunately what we get is (I’m sorry to say) a rather dull plot about a medieval place called Farwin Wood where there were tragically failed romances resulting in a war between two Houses. Sarah unfortunately becomes a different character completely and Ricky, unfortunately, doesn’t.

This new world, despite some funky creatures, doesn’t feel special or magical and I found myself longing for Blinney Lane and it’s residents and the shy, burgeoning romance Sarah had with her delivery man.

I enjoy stories where people travel to far away lands via magical means but it was just unfortunate that the fantasy world turned out to be more ordinary than the real one.

Oddly, I feel like the story would have been a more interesting one if it hadn’t tried to get too clever.