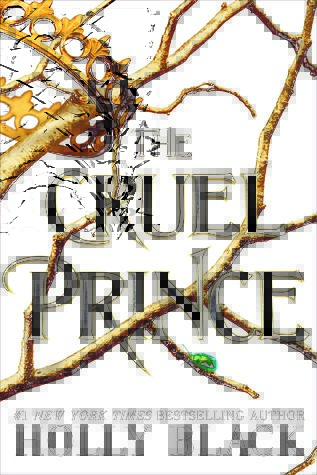 Of course I want to be like them. They’re beautiful as blades forged in some divine fire. They will live forever.

And Cardan is even more beautiful than the rest. I hate him more than all the others. I hate him so much that sometimes when I look at him, I can hardly breathe.

Jude was seven when her parents were murdered and she and her two sisters were stolen away to live in the treacherous High Court of Faerie. Ten years later, Jude wants nothing more than to belong there, despite her mortality. But many of the fey despise humans. Especially Prince Cardan, the youngest and wickedest son of the High King.

To win a place at the Court, she must defy him–and face the consequences.

As Jude becomes more deeply embroiled in palace intrigues and deceptions, she discovers her own capacity for trickery and bloodshed. But as betrayal threatens to drown the Courts of Faerie in violence, Jude will need to risk her life in a dangerous alliance to save her sisters, and Faerie itself.

At the time of writing this review Goodreads have rated this as 4.21 out of 5

On a drowsy Sunday afternoon, a man in a long dark coat hesitated in front of a house on a tree-lined street. He hadn’t parked a car, nor had he come by taxi. No neighbor had seen him strolling along the sidewalk. He simply appeared, as if stepping between one shadow and the next.

Everyone in The Cruel Prince is an asshole.

There, I said it. I said I would say it.

The problem I have with writing this review is that I have done an annoying thing which is read a book and then wait three months to write the review on it. That’s not a good thing. This means that this is going to be a rather crappy review of a rather good book.

Sorry The Cruel Prince, you don’t deserve my half-baked and confused ramblings.

First and foremost this is my first Holly Black book. All I knew of her was this: –

She writes stories about faeries.

All I knew about Sarah J. Maas before I read any of her stories was this:-

She writes stories about faeries.

I knew both write for the YA audience and while I don’t want to use a review on one book to mention others I ended up reading the A Court of Thorns and Roses series first and was left feeling despondent for a multitude of reasons. While there were glimmers of the potential of the fae and the world of faerie in the series it just didn’t hit the mark.

Fae are supposedly beautiful and dangerous and otherworldly but in the A Court of Thorns and Roses series I wasn’t getting the vibe of otherworldly at all. In fact if the setting was switched to modern day America there would be no change to the characters or really any of the places.

I say these things because I went in with low expectations of Holly Black. Sorry, Holly. I had been burnt by the promise of YA fae stories and was cautious about reading anyone else’s.

But what a surprise I had and a pleasant one at that! I read this in one sitting over the course of an evening (don’t you love when that happens?!) just because I found The Cruel Prince to be that enjoyable!

Here it is in a nutshell: –

Everyone is an asshole and that includes our protagonist Jude. Is the fact that 99% of the characters are deeply mean spirited and unlikable mean we don’t actually like them? Au contraire mon ami. We don’t like all of them but we like not liking them. The ones that we root for we still root for because we know that they’re assholes but we understand why they’re assholes. I’m not making any sense am I?

Jude for instance – she’s our protagonist but not necessarily a heroine. She doesn’t just want to survive in this world she wants to thrive and if that involves questionable methods to obtain the goal of power so be it. But her reasons for wanting power are because of the horrific way the fae treat her as a human.

Taryn, Jude’s twin sister, is another example – she does some very questionable things herself but again she has the same reasons as Jude – she also wants to thrive in this hostile world but her way of doing it just differs from Jude’s. Still she is a complete asshole and I just couldn’t stand her because of her behaviour but I quite enjoyed waving my fist at the page and going, ‘Taryn, you almighty cowbag.’

What I also enjoyed was the otherworldly nature of the fae and the world they live in. The fae are beautiful but they are not set to standards of human beauty. They have tails and elongated teeth and green skin and strange inhuman eyes. The world is beautiful and deadly and the rules of the fae apply. They can’t abide iron and they can’t lie and those things are used in the plot.

There is also a plot – yay – and it has twists and turns and political intrigue. In a strange way this is like Game of Thrones with faeries and for YA. Power is the name of the game here and Jude and others are playing (often underhandedly) for keeps.

As for Cardan? Ah, Cardan. You’d be forgiven for thinking that he’s the cruel prince of the title but I’m beginning to think that Holly Black doesn’t make things that easy or spells it out for her readers and I do like that too.

Overall I would say this gets a glorious 4 stars; I enjoyed the asshole characters and the complex but not too complex plot and the intricate world-building and the easy to read but still descriptive writing style.

This review gets a self-rated one star. It mentions the word asshole way too many times to be used in polite company.