In honour of Father’s Day the Top 5 Wednesday group have picked Favourite Fathers/ Father Figures for this weeks topic. Now unlike other celebration days Fathers Day is on the same day in both the UK and US so even though this is in honour of the US date it oddly works out for the UK too.

Yay for things to go yay over!

This also ties up quite nicely my recent family themed Top 5 posts which includes Favourite Siblings (one and two) and Mothers in Fiction.

Now this topic is Fathers/ Father Figures so we may not be talking someone who is an actual Father but someone that embodies the traits that we associate with Fathers. What those traits are probably differs within cultures and some of these Fathers/ Father Figures may very well be Fathers but are not necessarily any good at the role… 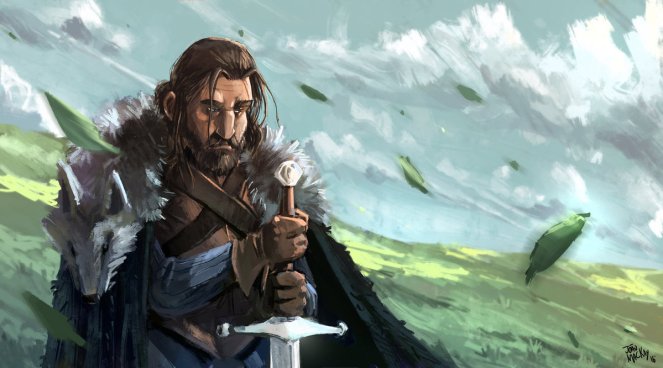 Technically Ned just needs to show up to a birthday party or two and he would win Westerosi Dad of the Year. But Ned is genuinely a caring and loving father. Unfortunately he is human and is flawed and the concepts of honour and duty (which he wants to pass down to his children) backfires against him and ends up putting his entire family in danger.

Oh Ned. But as Whitney Houston says, I will always love you.

George from Of Mice and Men is not a father and he most definitely is not Lennie’s father but he does more in the way of paternal self sacrifice than a lot of others.

George and Lennie are friends so why am I putting George here and not in a Top 5 Friends list? Well if you don’t know the painfully sad story of ‘Of Mice and Men’ I will give you a brief overview here.

George and Lennie are field workers in America during the time of the Great Depression. Their collective dream is to save up and own their own farm one day and this dream keeps the pair of them going. Though it doesn’t take much to buoy up Lennie’s spirits because Lennie is mentally disabled and acts and thinks very much like a child while George is the one who takes care of him and protects him. This is not an easy task as Lennie has a fixation on soft things (clothing, animals, hair) which never ends well.

You may question why George – who is intelligent and hard-working – doesn’t just ditch Lennie and go forth on his own? Lennie who is nothing but a hindrance. Lennie who causes them to have to leave place after place.

Well personally I think a large part of Of Mice and Men is about that strong, protecting, paternal love which yes, includes sacrifice and doing the ‘right’ thing for those you have taken under your care.

The ever wise Dr. Ian Malcolm of Jurassic Park said this:

Someone who could have benefited from such wisdom is another Dr – Victor Frankenstein of Mary Shelley’s Frankenstein.

First of all – way to go Mary on practically inventing the science fiction genre. When science fiction is harped on about being a ‘male’ genre and a lot of really upset sexist males get annoyed that women are in ‘their things’ I would like to remind them that a debate exists around Frankenstein being the first recorded science fiction novel and that said novel was penned by a woman.

Frankenstein is in this list because an act of scientific curiosity and hubris means he decides to create new life. Unfortunately this new life is a ‘person’ built of several components of dead criminals and brought back to life. Frankenstein realises that he has made a big ‘oopsie’ and does what some other men do when they realise they’ve made an oopsie and have fathered an unwanted child. He scarpers.

This does not end well.

Frankenstein fathers a creature and then abandons it. The creature just wants acceptance and love from his ‘father’ which turns into anger and hatred when he realises that his ‘father’ wants nothing to do with him.

Never mind this being the first science fiction novel, this is the first child abandonment novel.

Speaking of bad fathers I would chuck Zeus, King of the Gods in Greek Mythology, into the hat and I would also crown him King of the Deadbeat Dads.

This guy is so oversexed it’s ridiculous. A quick glance at Google tells me that he has an estimated 54 children – 31 that are divine and 23 that are human. This dude did not believe in contraception. He did believe in knocking women up in whatever way possible. Turn into a shower of gold? Sure. How about a swan? Why not. What about a bull? Why, that’s not even a challenge!

Is he a hands on, loving, active father? Not really. He has his favourites and he does some intervening in some cases but I personally think he takes all those animal forms simply so he can skip out on paying child support. Can’t pay the money if they can’t find you eh, Zeus?

I mean the guy did not have a good relationship with his own father so maybe he needs some counselling to get over those issues.

You know I like to throw in a cheat.

Technically this isn’t from a book BUT…but… there are graphic novels now so I’m going to hold onto that.

Giles is Buffy’s Watcher. His job is to teach her the ways of being a Slayer and to guide her through all the trials she will face with a professional and detached manner. He is very British and very stuffy and starts off his relationship with Buffy just as expected – he is her Watcher. Nothing more. Guide her. Train her. Keep her alive.

Nothing ever goes the way it’s expected to.

Watching (excuse the pun) Giles and Buffy’s relationship grow beyond Watcher/ Slayer is heartwarming. Giles takes on a father role to all of the Scooby Gang but Buffy holds a special place in his heart and time shows the deep paternal love and affection (and eye-rolling irritation) that he has for his pseudo daughter and it also shows the deep, respectful love that Buffy has for him.

Nothing ever goes the way it’s expected to. Sometimes it goes better.

How are my offerings holding up? Any fathers/ father figures you think should be on here? Let me know what you think!