My Top 5’s are usually part of the Top 5 Wednesday group on Goodreads but I’m living a little and have decided to throw in a wildcard.

This post is in honour of National Sibling Day which took place on 10th April. Siblings are great, aren’t they? Aren’t they?

If I give it much thought I come to this conclusion – sibling relationships are weird. These are people – roughly your age ‘ish’ – that you are thrown into this world with. You’re supposed to love and care for them but at the same time if you get one of them in a choke-hold in the living room because they ate your slice of cake from the fridge that you had really been looking forward to then this is seen as socially ok.

Now though? Yeah, I like ’em. Don’t tell them that though.

Every time I thought of some fictional siblings I kept thinking of more and more until I had waaaay over five. Here are my top five. I’ll hold onto the others until a later date maybe. If anyone is interested 😉

Ah, The Bennet Sisters. Standard entry but who the heckin’ cares! The simple fact that they are all girls is one of the key driving factors of the plot. Mrs. Bennet and her nerves had a point; back in ol’ Regency times you didn’t have many options if you were a woman and marriage was one of those viable options. Feminist it is not. Accurate it is.

Mr. and Mrs. Bennet just sort of gave up parenting after Lizzy and so the sisters’ personalities seem to be an outcome of the effort their parents expended; Jane and Lizzy are the mature, older sisters (though different in personality) and Kitty and Lydia are the younger sisters where Kitty’s personality is simply, ‘Lydia.’ Oh, and then there’s Mary.

Despite the fact that there is such divisions in personality there is love and affection between them, though it tends to flow more from the older sisters to the younger ones and between the older two especially. Siblings trying to look after and protect each other is another key driving factor of the plot. And not just from the Bennet sisters either – mad props go to Mr. Darcy and his never-ending love and support for baby sis Georgiana.

For books with such a large cast of characters, siblings don’t often crop up in the wizarding world of Harry Potter. We have a lot of only children which must be due to all those magical contraceptive potions. Don’t worry, The Weasley Siblings are enough for anyone!

We obviously know Ron the most and interestingly a lot of his hang-ups are based on two things – his best mate is the chosen one and in his family he is the sixth of seven children. Ron comes just before the much wanted only girl and just after the most ridiculous and well-loved pair of naughty twins in popular culture. We also have the incredibly cool eldest brothers. In Ron’s opinion, it sucks.

But I’ll tell you what doesn’t suck for Ron. Aside from when Percy became a bit of a d*ck, the Weasley’s are the Weasley’s. There is no way they wouldn’t go down swinging for each other and in fact do so, time and time again.

Unpopular opinion: I personally think that Harry had a ‘Laurie’ from ‘Little Woman’ thing going on. Sure, he loved Ginny but I think more than anything he wanted to be part of the Weasley clan.

Which brings me to…

Don’t get me wrong, I can see why Laurie wanted to be in this family, what with their hobbies and their group activities and their daydreaming sessions about castles in the air and the refusal to let your sister tag along to do cool stuff with you because she’s too young and the subsequent burning of a hand written manuscript resulting in the ignoring of your bratty younger sibling until they fall into some ice and…

Honest to god, I feel like ‘Little Women’ contained an incredibly accurate portrayal of that special duplicate feeling of both loving your sibling and wanting them to leave you the f*ck alone.

This is what you get when you raise four women with very individual personalities, right Marmee? 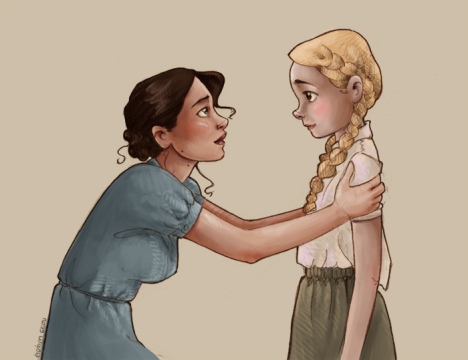 If we’re talking about siblings going down swinging for each other then I have to mention The Everdeen Sisters and the role that Katniss takes in her little sister, Prim’s, life.

Not only has Katniss spent a lot of her own childhood keeping Prim alive in crappy District 12 where starving to death is a painful reality, she does the most uber older sibling act ever and volunteers as tribute when Prim is reaped for the Hunger Games.

That one act of big sister loves triggers events that no one would have expected.

In fact despite Katniss’ protests that she is an emotionless clod she ends up being one of the most caring and nurturing characters (cough *Rue* cough) in the book. You just need to peel off all those layers. I’ll fight anyone who says otherwise. I’ll fight but I won’t win… c’mon… I’m no Katniss.

Disclaimer: this picture of The Stark Siblings is not based on the books but on the TV show. The book Starks look a bit different (aside from Sansa) and I wanted to open with this in case any purists read this.

What does remain the same in both medium’s is the fact that, in a world where some of the sibling groups are just not normal, the Starks are a group of brothers and sisters that piss each other off, are closer to some siblings than others, have nothing in common with the others and yet still deeply love each other. So… a modern family then by Westeros standards?

In contrast to the ‘Harry Potter’ series, ‘A Song of Ice and Fire’ series has a large amount of sibling groups which even extends into the backstories. Some of these prior sibling relationships are even incredibly pivotal to the events of the series and quite possibly with events yet to come.

We have the Tyrell’s, the Martell’s, the Tully’s, the Dayne’s, the Starks, the Greyjoys, the Targaryen’s and the, ahem, Lannisters. All of which have different and often complex bonds with their brothers and/or sisters. Looking at you Jaime and Cersei.

Out of the above I think my favourites are the Starks and I include the previous generation in that as well. I mention that it was an older sister’s love in ‘The Hunger Games’ that kicked off the plot but in ‘A Song of Fire and Ice’ we are looking at an older brother’s love that has kicked off the entire story. We just don’t technically know that yet. But we know.